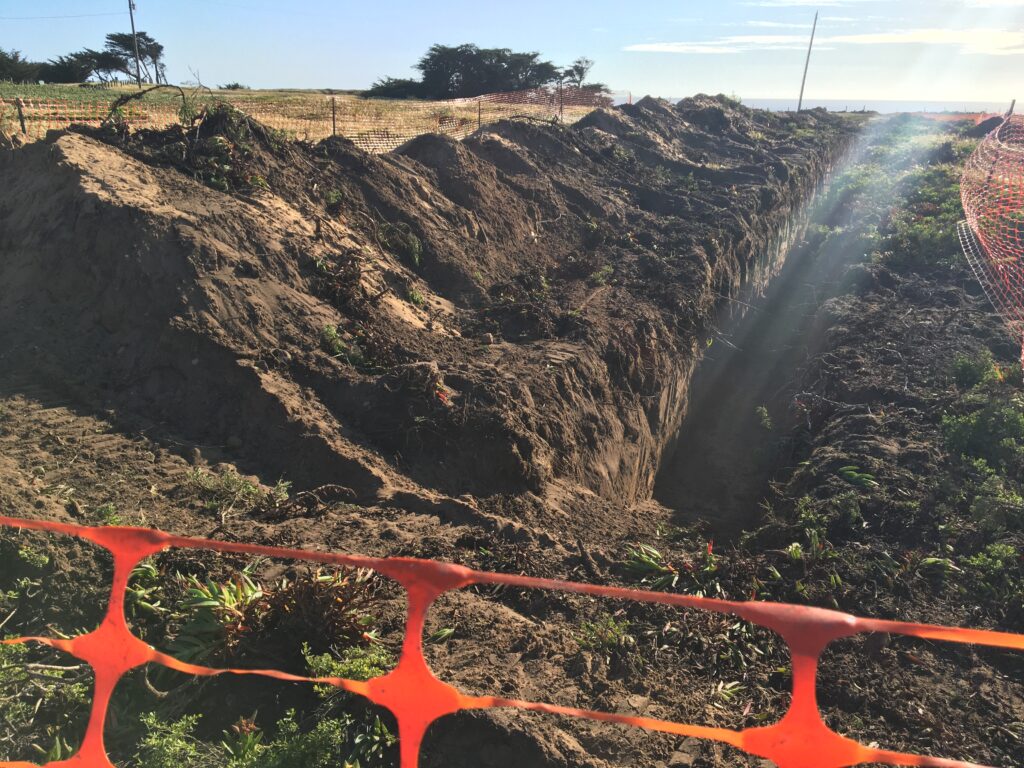 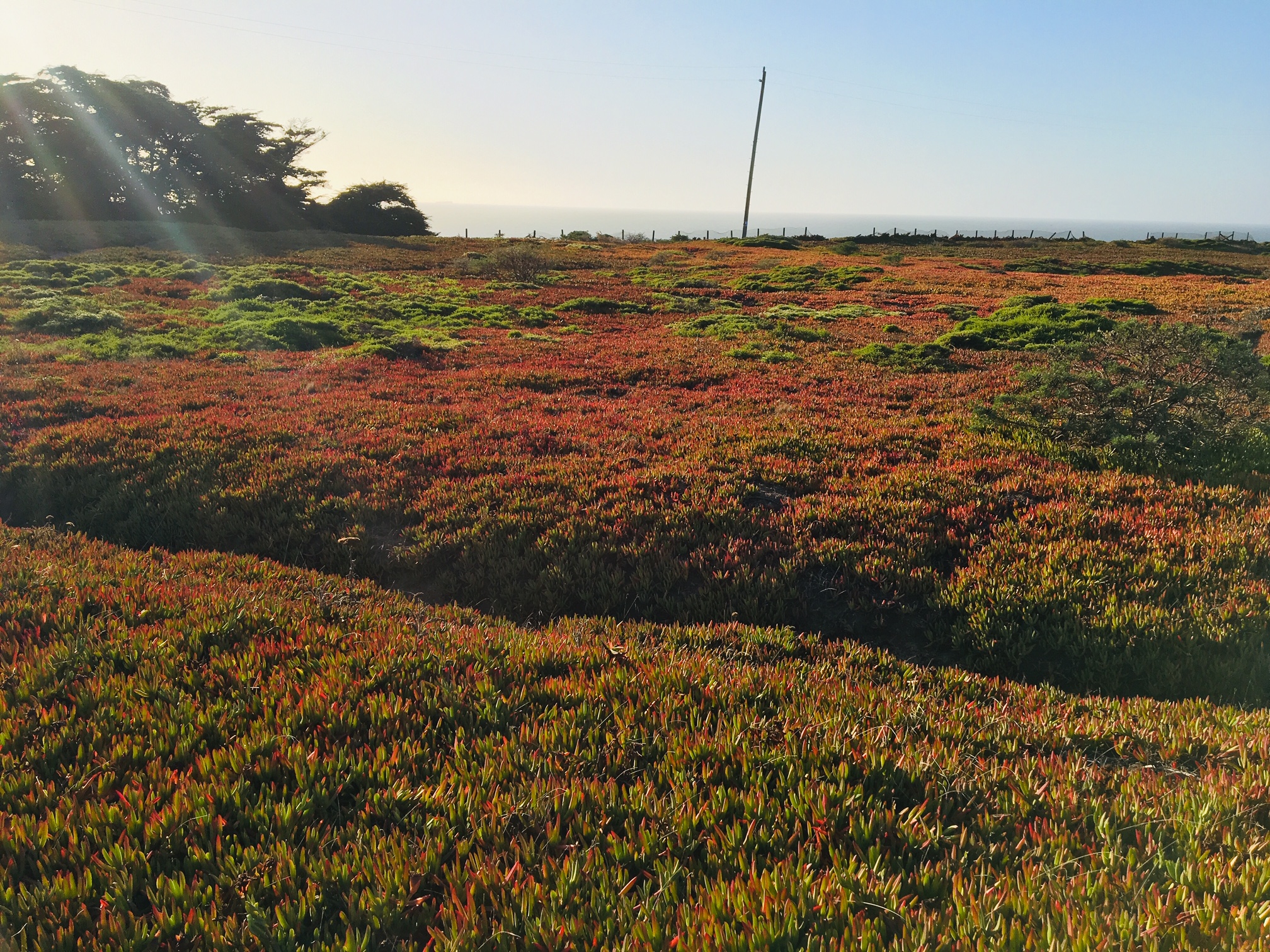 We plan to alert the media once the testing process breaks ground. The birding nesting season has begun and disruption of nesting is a CEQA violation. The nesting period extends from February 1st to August 31st. We will continue to monitor how Sand Hill Properties proceeds.
Public comment voicing opposition to this project should continue at all Daly City Council meetings (the second and fourth Monday nights at 7pm) and with the Coastal Commission:

For those interested in San Mateo’s latest projections of risk due to earthquake seismic activity in Daly City, see this link. The data is provided by ABAG (http://quake.abag.ca.gov/earthquakes/sanmateo/). 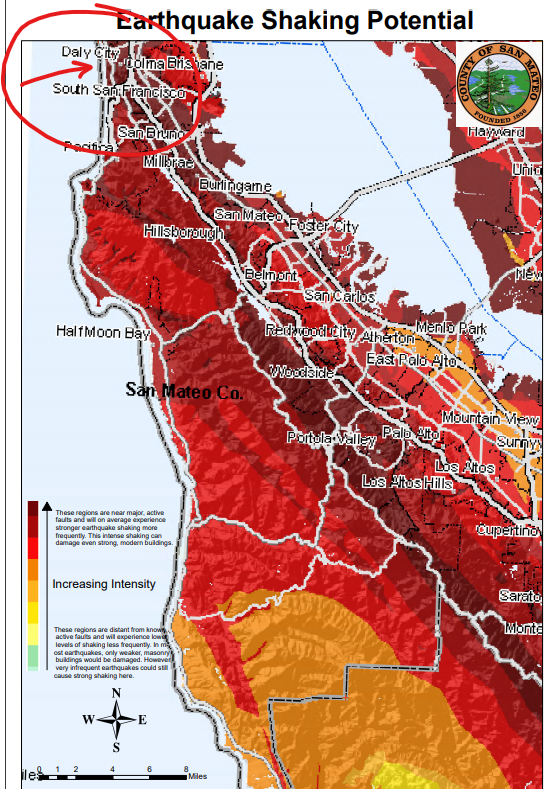 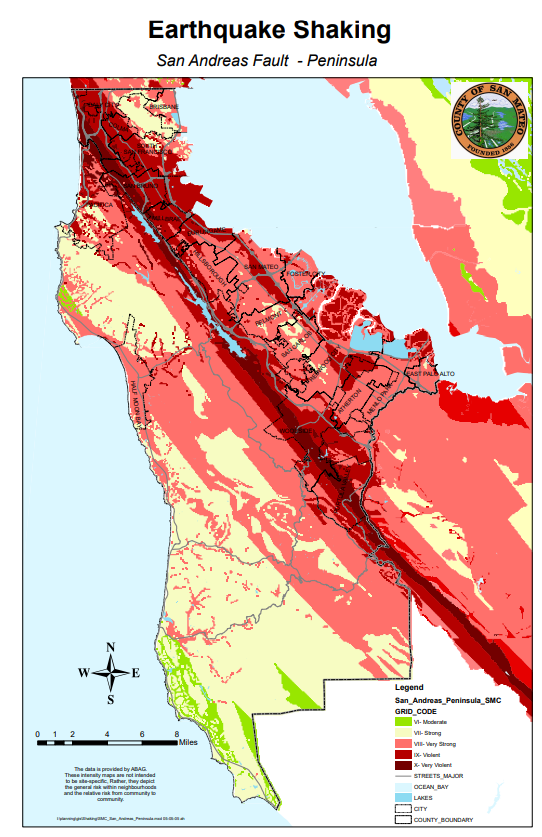 Despite our best efforts, the Coastal Commission approved the CDP for geotechnical testing of the land. We await San Hill Properties nesting mitigation next steps.

We are close to 10,000 signatures on our petition.

The San Francisco Examiner has posted this article about public resistance to the Olympic Retreat Center project.

On March 12th, the California Coastal Commission will address our appeal of the Coastal Development Permit for testing.

While the CCC staff has recommended that our appeal poses “no substantial issue” and wants to give Daly City Council jurisdiction over the CDP, we believe that replacing loose dirt into 6 pits up to 250 feet deep and a trench 5 feet long, 5 feet wide and 5 feet deep will pose  a safety risk when this aerated dirt settles once it rains. These pits and the trench will undoubtedly reappear immediately after a storm blows through and someone (or their animal) will get hurt.

As an example of how rain can impact bulldozed, aerated sandy bluffs, you only need to recall the complete destruction of the Olympic Club’s 4-holes west of Skyline on their Ocean golf course in 1997.  “The 15th green has slipped, the cart path behind it has dropped about 12 feet into the sand dunes and the bunkers around it have fallen as many as 20 feet. The 16th tee was washed into an adjacent fairway.”

To submit comments to the Coastal Commission about the CDP for testing issue, please either respond in writing by March 5th, or participate via Zoom on 3-12:

We are agenda item 15a at the March 12th meeting.

You can also participate via Zoom but need to fill out a speaker request form here. Virtual meeting instructions are here.

If you wish to participate by phone, call (415) 904-5202 and the CCC staff will provide a call-in number. Be prepared to tell staff your name, which agenda item you wish to speak on and provide a telephone number where Commission staff may reach you.

The virtual Coastal Commission meeting on March 12th will be webcast, just as its regular meetings are, and can be viewed here.

At 10:30, you’ll see a great shot of the cliff collapse right  next to the Thornton Vista.

Jennifer K. sent in these photos showing increasing cracks in the cliffs near TBBP due to the earthquake Jan 18th and continued landslide activity. She notes:

“I noticed what appears to be an active landslide on the south side of the park where the mid-level bluff ends, and the trails go down to the beach.  Perhaps this is not new news, but I do find it fascinating to watch the ground actively changing in a matter of 10 days.  And also most certainly give pause to anyone considering developing in the adjacent area. I first noticed cracks and slippage on the 19th, after the earthquake from the evening of January 18th.  Today (Jan 29th), after the recent storms, I observed parts of the bluff had been washed away and the cracks are growing up the bluff.    I wanted to share a few photos.  The easiest change to notice is how the human walking trail disappears between 1/19 & 1/29.  I also drew a line where one of the significant cracks is growing.” 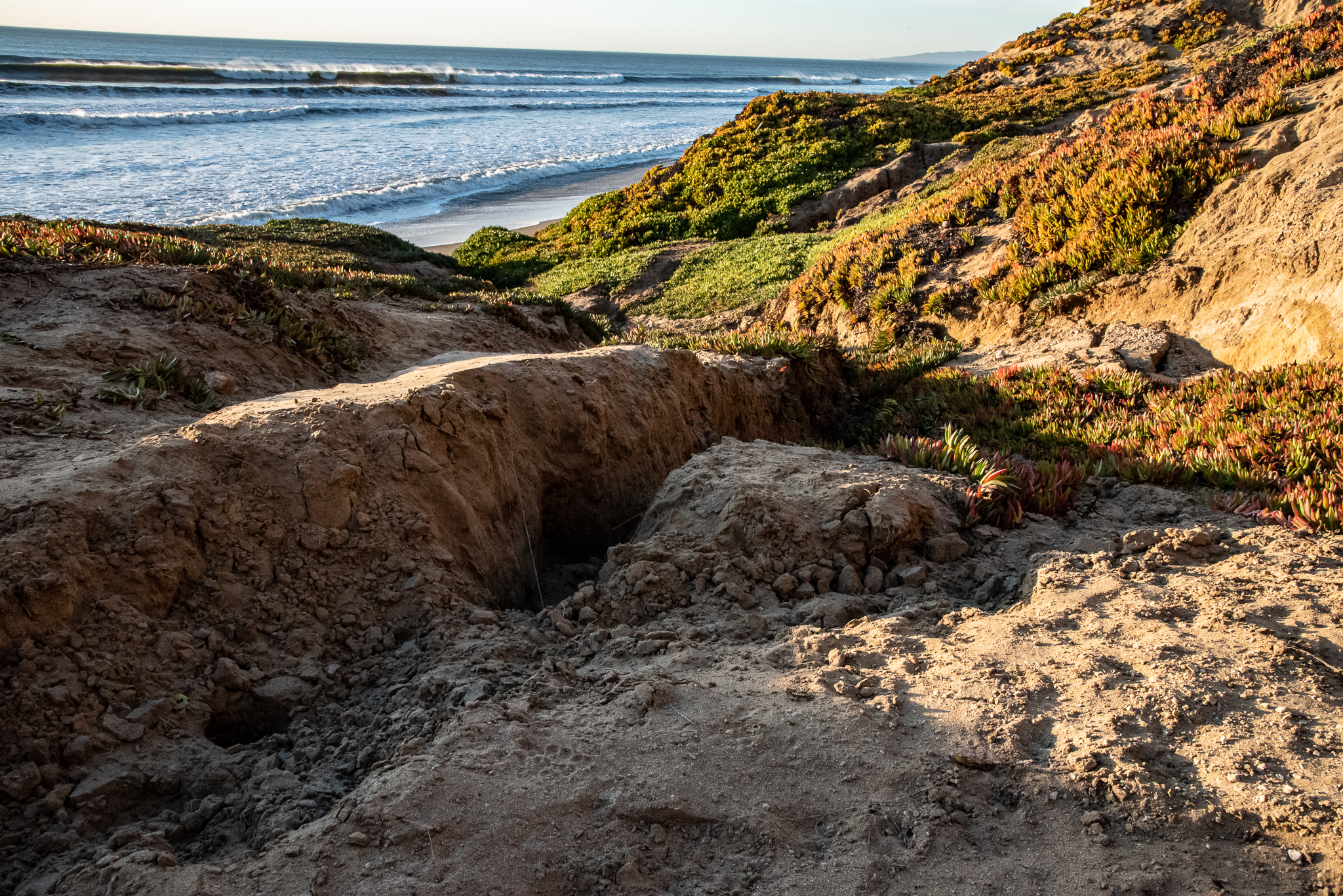 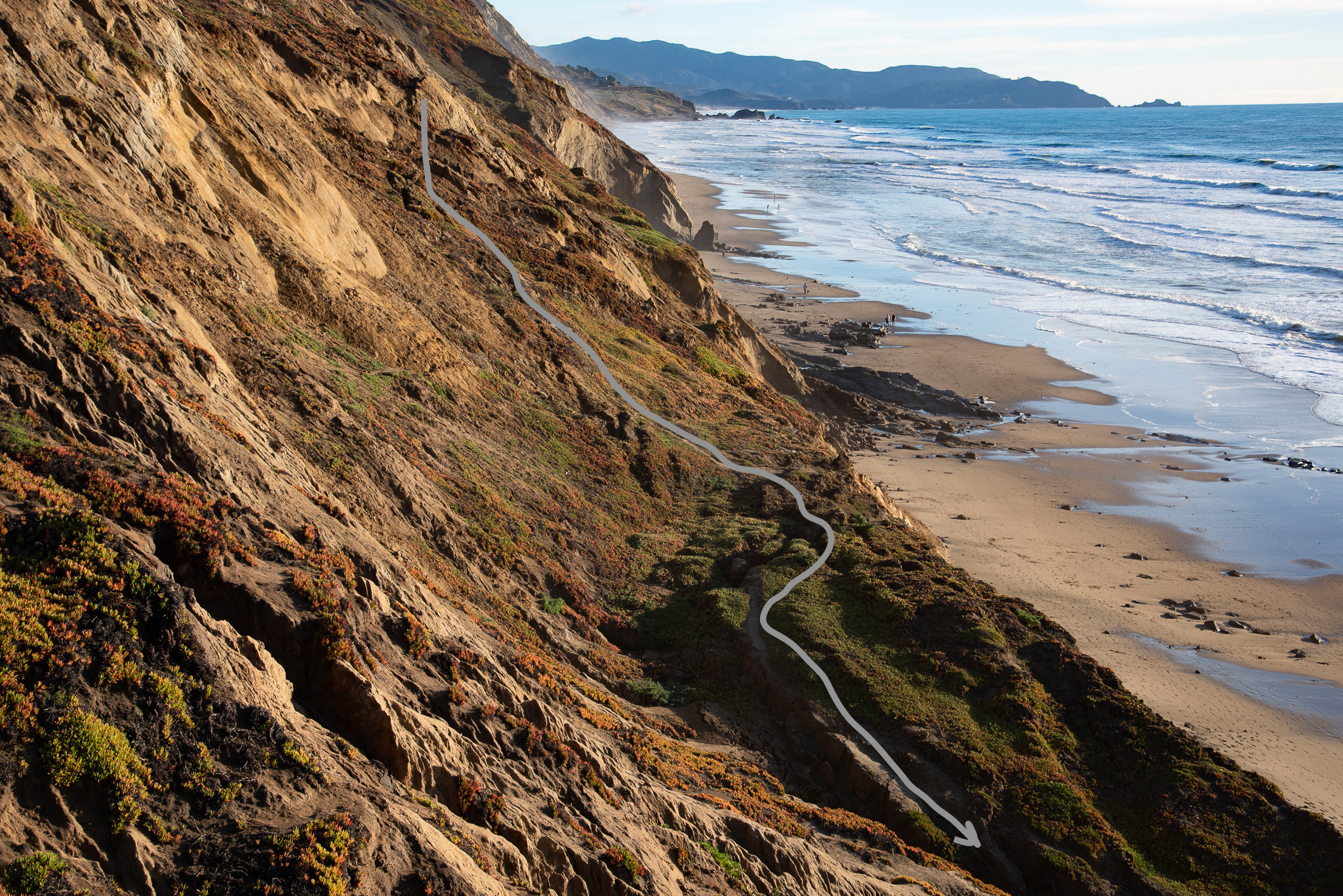 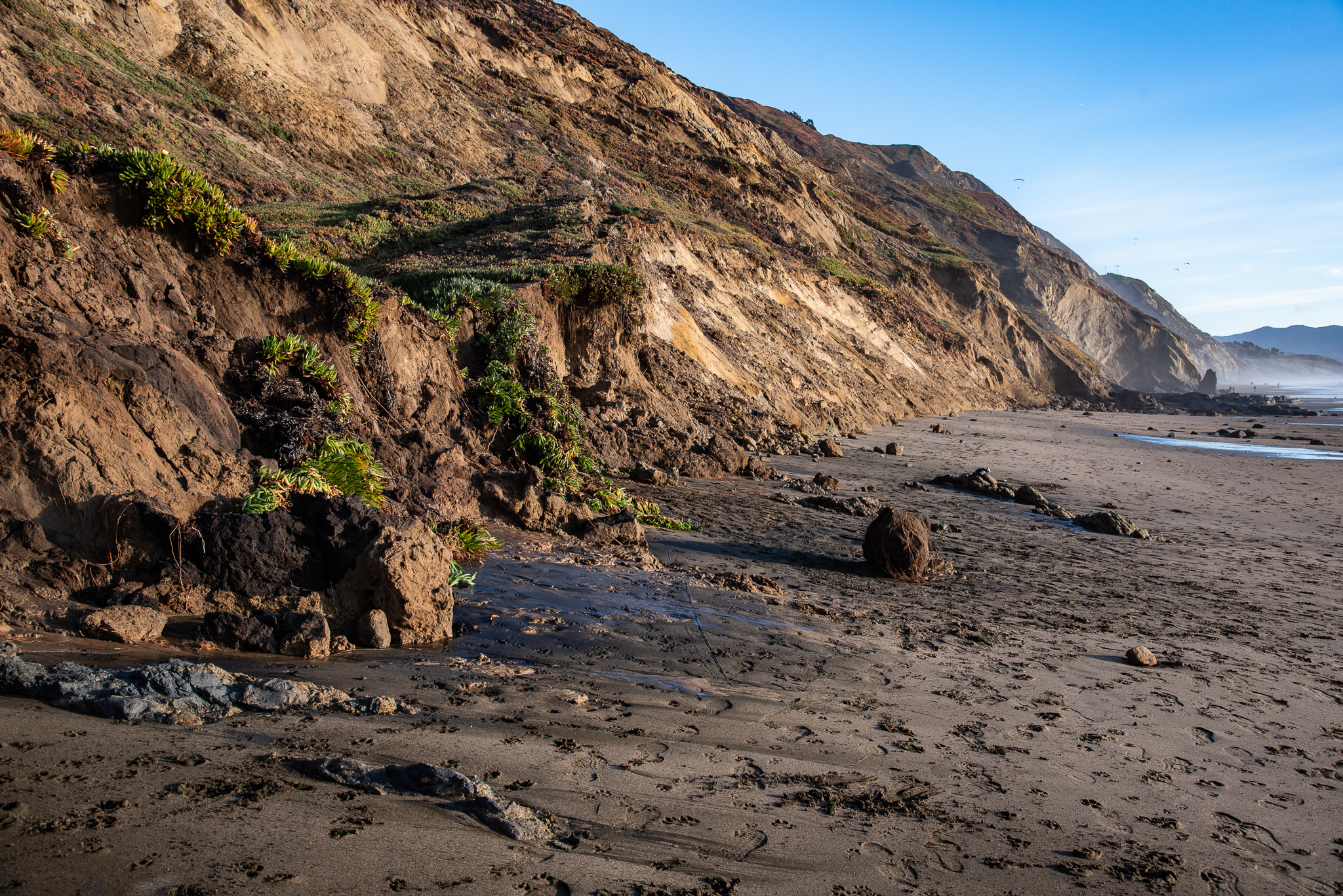 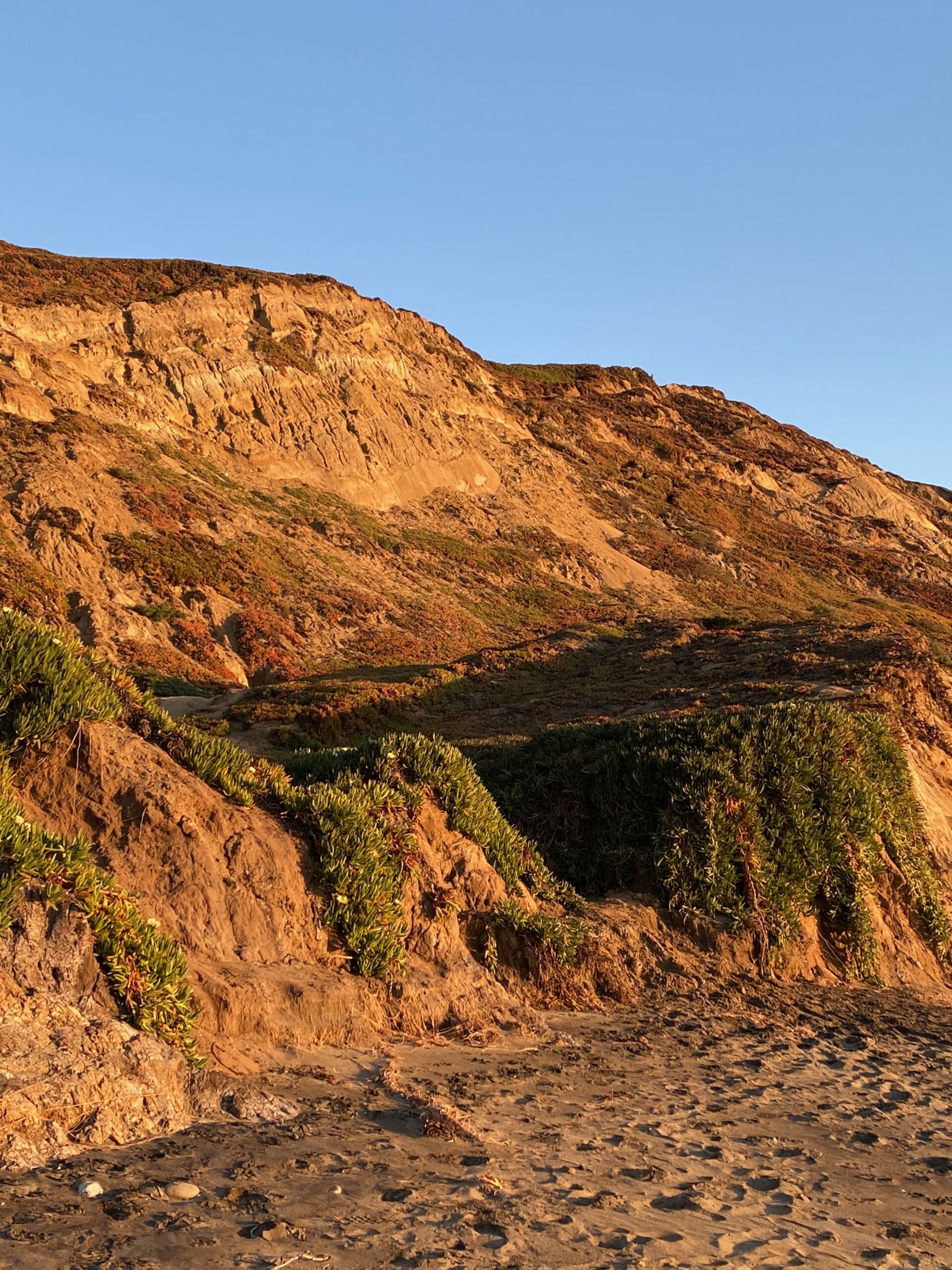 Phillip S. also sent  these in: 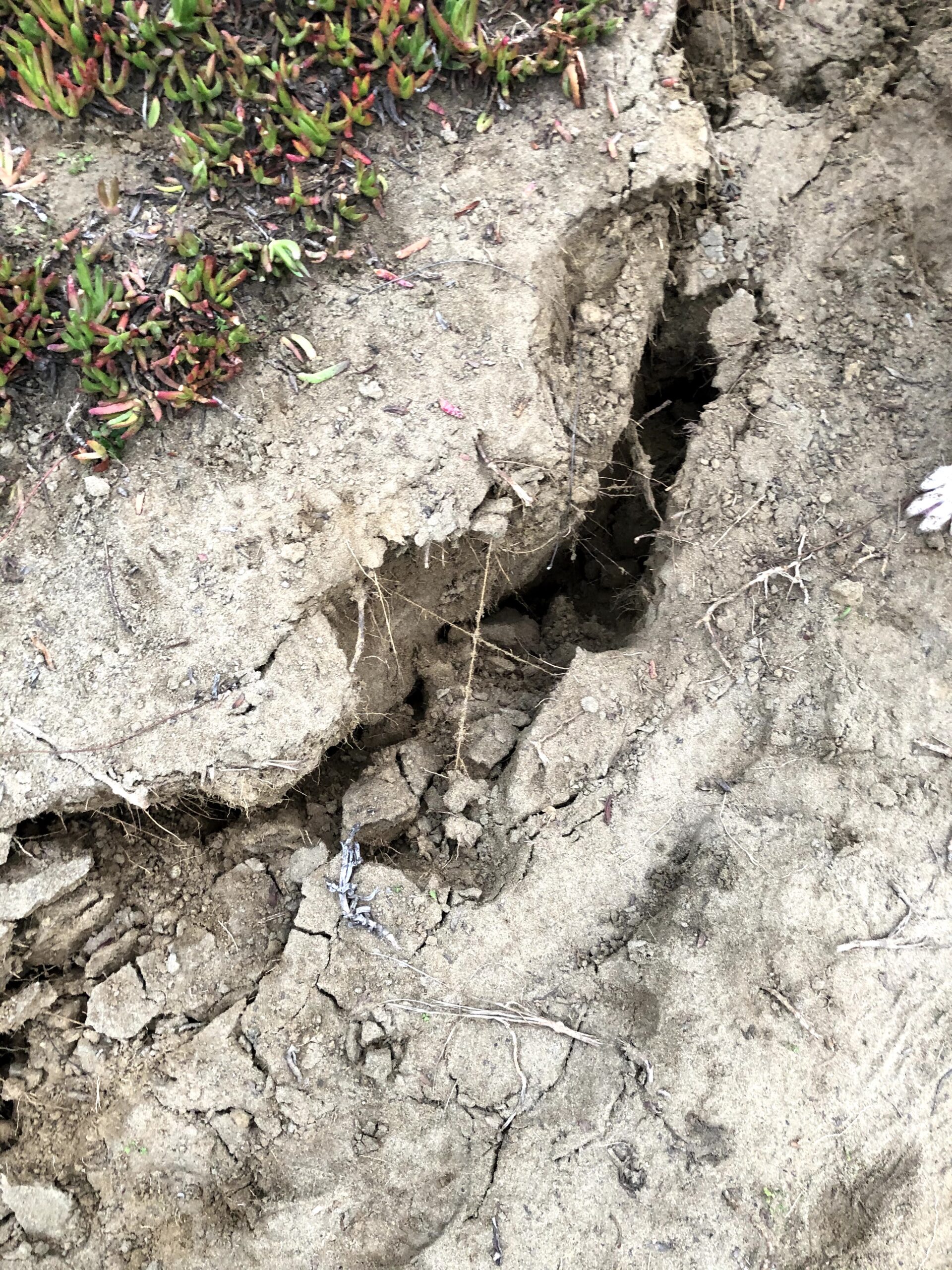 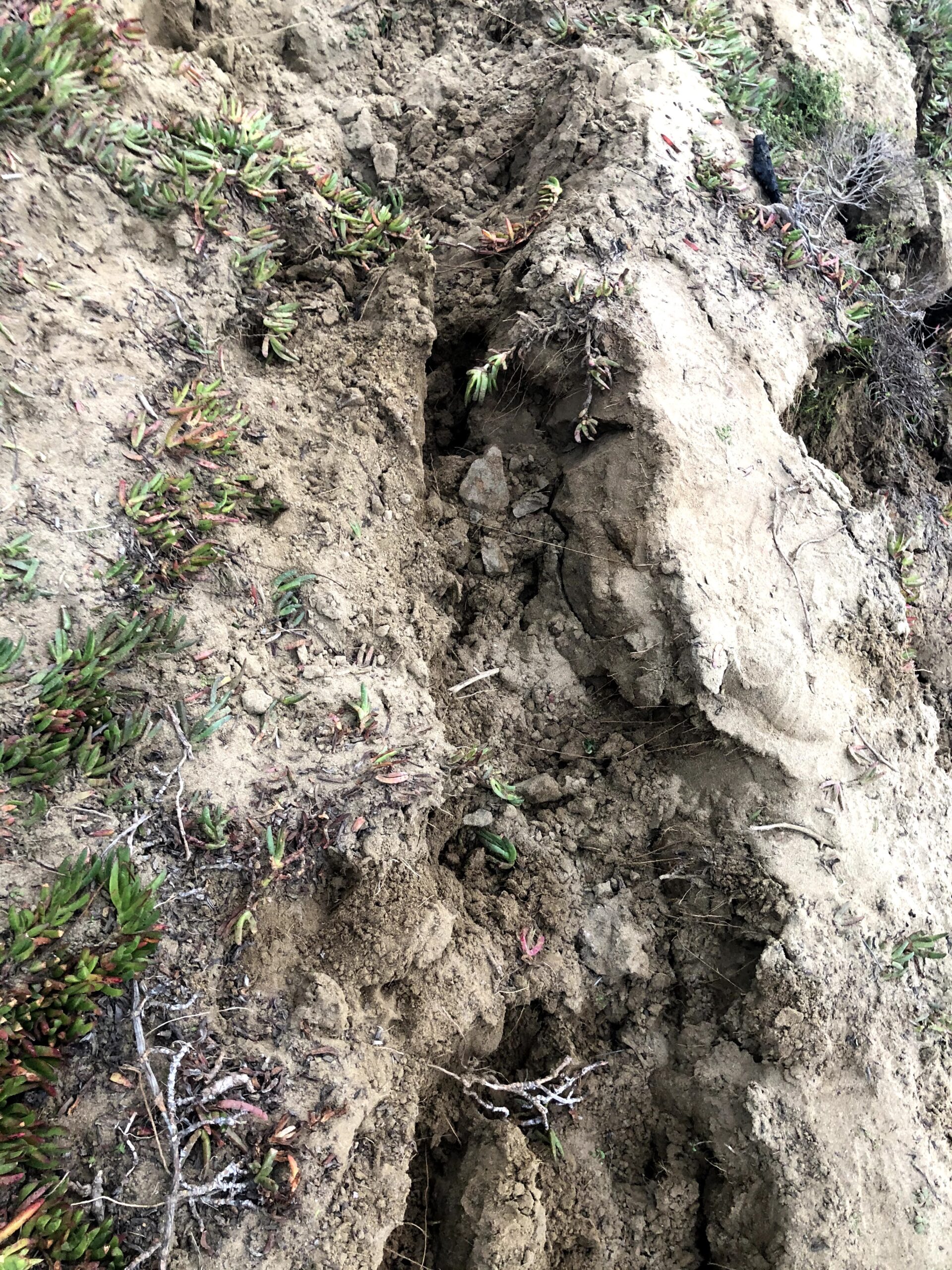 For those of you who have asked about the current location of the San Andreas (and neighboring San Geronimo) earthquake faults vis-a-vis Daly City and the history of landslides in the area, please see the below maps showing these locations.

According to the the California Earthquake Authority: 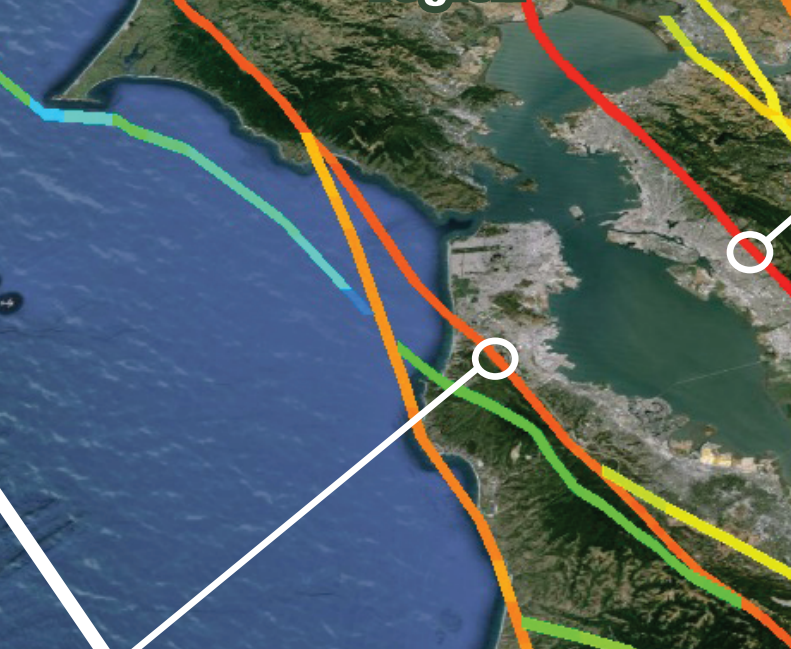 Here are the locations of landslides on the Daly City Coast: 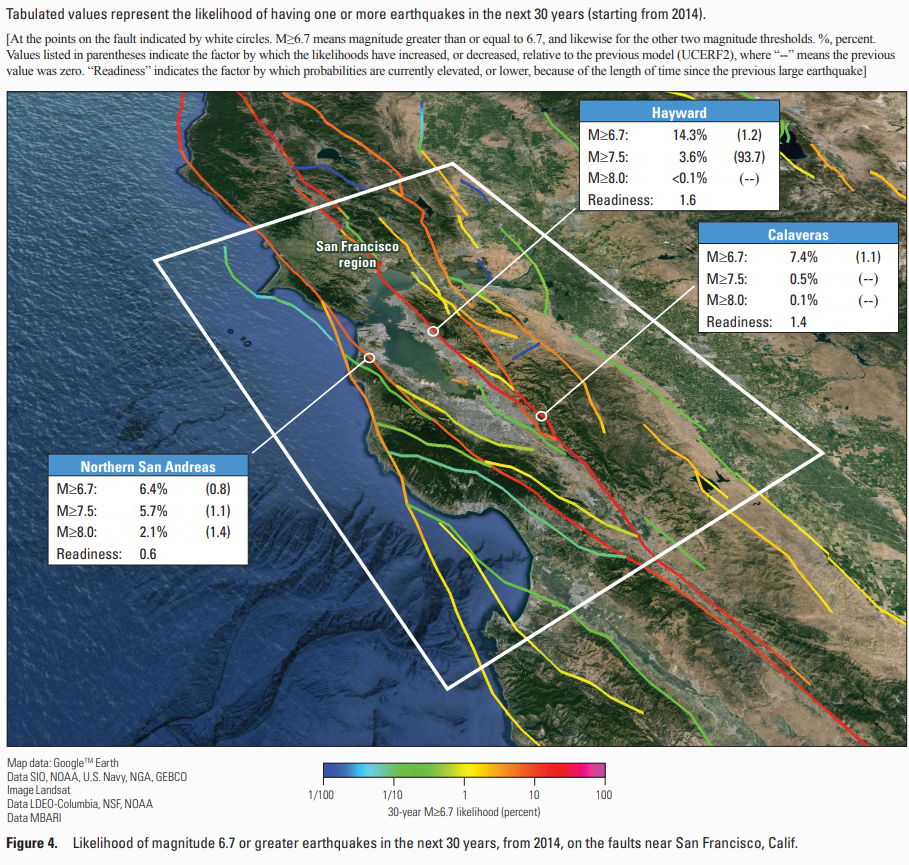 Here are the Great Blue Herons who have taken up residence on the land in question: 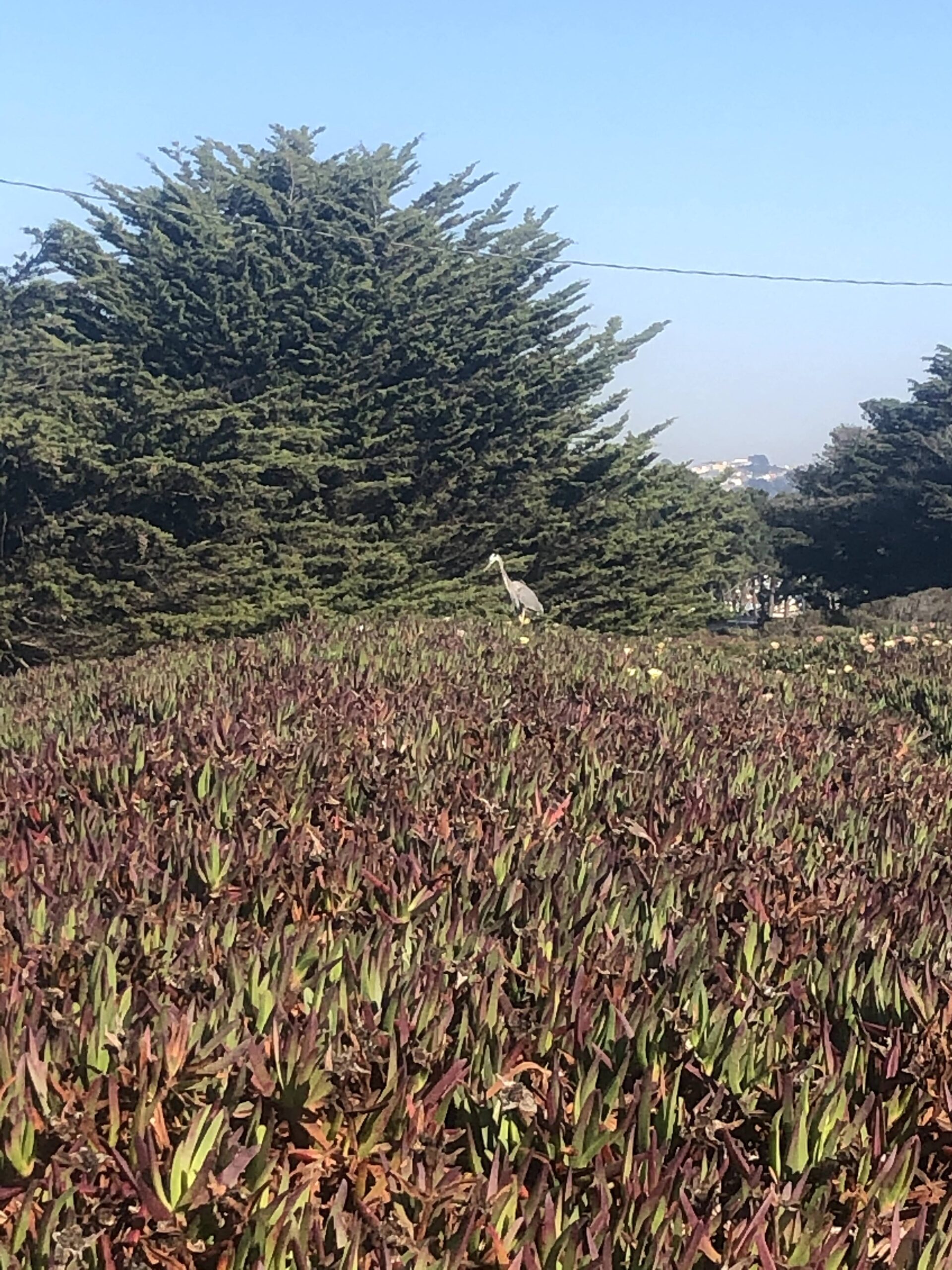 We have over 317 supporters from Daly City.

Despite 77 emails from the public all in opposition to the project (with only one in support), the Daly City Council voted 3-to-2 in favor of granting the Coastal Development Permit for geotechnical testing of the land at Thornton Beach Bluff.  While this was a disappointment, this meeting showed that some members of the Council are listening to our objections and we need to keep up the pressure to stop this project from proceeding. 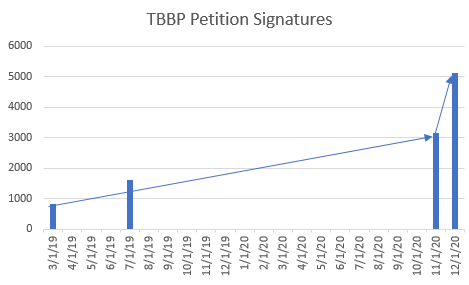 Watch the video (agenda item starts at 31:00 minutes in to the broadcast)

Here is what the developer intends to do on this land during testing:

Sand Hill Properties is continuing the CEQA process in support of their 49,650 square foot Olympic Way Retreat which would be built on the vacant land to the south of Mar Vista Stables. They also had with a recent meeting with the Airport’s Land Use Committee on 5-28 to get their approval of the Daly City Local Coastal Plan Amendment they need to get DCP approval of the project. Our latest information from Daly City Planning: This project requires reviews by the Airport Land Use Committee due to the required LCP Amendment and its location within an Airport Influence Area. The Committee recommended approval of the project the Airport’s C/CAG Board. The C/CAG Board will review the project at a future meeting date (date TBD). From a DCP perspective, the project is “incomplete” to date while Sand Hill addresses comments from various Daly City government departments, agencies, and the CEQA consultant. The Initial Study is also still being prepared. Public hearings for this project will not be determined until it’s deemed complete. This area is heavily used by hikers, dog walkers, fishermen, photographers, surfers, hang gliders, parasailers and many parking at the southern Thornton Beach Vista overlook and walking down the sole beach access trail to the Thornton State Beach in addition to being used by equestrians. Our next line of action will be marshaling the support of this community (many of which discovered Thornton Beach Bluff while Fort Funston was closed during the SIP due to COVID-19) in support of opposition to the Olympic Way Retreat Center project.

Sand Hill Properties has submitted a formal application to Daly City Planning for an “Olympic Way Retreat Center” to be built on the vacant lots to the south of Mar Vista Stables. This area is heavily used by hikers, dog walkers, fishermen, photographers, surfers as well as by trail riders and equestrians, many parking at the southern Thornton Beach Vista overlook and walking down the sole beach access trail to the Thornton State Beach. This area is  also used by the Fire Department, Park Rangers, Police Department to access the bluff and beach.

This application includes a request for rezoning and a CEQA/EIR review (requesting a mitigated negative declaration e.g. “no environmental impact”) and an amendment to the Daly City Local Coastal Plan. This project would require a new use permit and Coastal Development Permit. The CDP can be appealed to the Coastal Commission.

Daly City Planning has responded to the pre-application request from Sand Hill with this letter including:

Our next steps will be to meet with DCP and the Coastal Commission again to understand the process, next steps re public hearings and their perspectives. Stay tuned.

In the meantime, please sign our petition if you haven’t already.

July 11 2019: Did you catch this insightful article in the Los Angeles Times about the effects of climate change on the California Coast? A great read!

June 28 2019: It’s official! The landowner’s and developer’s deal to purchase the land at the Mar Vista Stables did not go through. We are hopeful that the landowners will ultimately take us up on our original proposal to buy the land so that we can protect it and our beloved barns forever.

May 8 2019: Earlier in April we met with Daly City Planning: As of our meeting date, our petition was at 1,356 signatures on Change.org. To date, Daly City Planning has not had a formal application from either developer for a CEQA Review or LCP Amendment (local coastal plan).  The 2 amendments the developers want to the Local Coastal Plan are alleviation of the 10% maximum building allowable on the land and the height restrictions (20 feet or one story, whichever is less) currently permitted.

Planning staff confirmed that a categorical exemption to CEQA (environmental) review is not possible for these parcels. They also noted that the parcels might require rezoning due to the parking requirements in existing codes vs what the developers have planned. Rezoning also requires Coastal Commission review.

For our plan, they said we would need to present any renovations to the Building Dept to see if demo permits and building permits were required. Ditto for a possible Coastal Development Permit (which also requires land owner consent of course) and would need to be reviewed with the Coastal Commission. Maintenance/refurbishment of existing structures is typically pursued without the need for building/demo permits.

We obtained the Torgon Group documents and are now reviewing these.

A public meeting for our supporters is to be scheduled most likely in June. Date to be announced shortly.

March 26 2019: Members of our Organizing Committee met with Coastal Commission staff on March 25th to review the requirements the developers would need to satisfy from a CC perspective to proceed with their projects (CEQA/EIR, amendment to LCP, CDP permit etc.). We also clarified the current extent of recreation taking place at Mar Vista Stables and provided data supporting this to the Commission. We further relayed our specific concerns with the proposed development proposals vis a vis the Coastal Act.

Staff confirmed that they would typically not review a project until the full application for a development is submitted, however, as in the Torgon Group’s case, this review could be requested earlier. The Coastal Commission has some concerns that Daly City is moving rapidly to try to simultaneously request to amend the LCP and issue a Coastal Development Permit. This cannot occur, however, without the CEQA recommendation and we will be staying on top of Daly City Planning regarding the status of that environmental review. Meanwhile, the developer, Harbinger, awaits their geological study.

Our petition to the Coastal Commission was also delivered to staff. We have 835 signatures in 3 weeks.

February 26 2019: The two developers, Harbinger Development and Sand Hill Properties, shared their proposals with Daly City Planning staff and the Coastal Commission who then reviewed the process for project review. Coastal staff recommended that the applicants conduct community outreach early in the process. They did not take a position on the proposals. They confirmed that the developers’ proposals both require an amendment to the current Daly City Local Coastal Plan (LCP). Here are the steps the developers will need to take if they decide to move forward:

The applicants will then need to conduct various technical studies such as a biological assessment, geotechnical study, and traffic and parking studies to determine the feasibility of the proposals on the subject sites and to guide site planning and design. In addition, Coastal staff conveyed that this will help them understand the constraints on the sites from a Local Coastal Plan (LCP) perspective. The CEQA environmental analysis on the Mar Vista/Palomar sites as well as Sand Hill Properties project on the vacant lot (for a conference center) will be processed concurrently.

The Coastal Commission and Daly City Planning are aware of our concerns with these two projects and will continue to work with us. 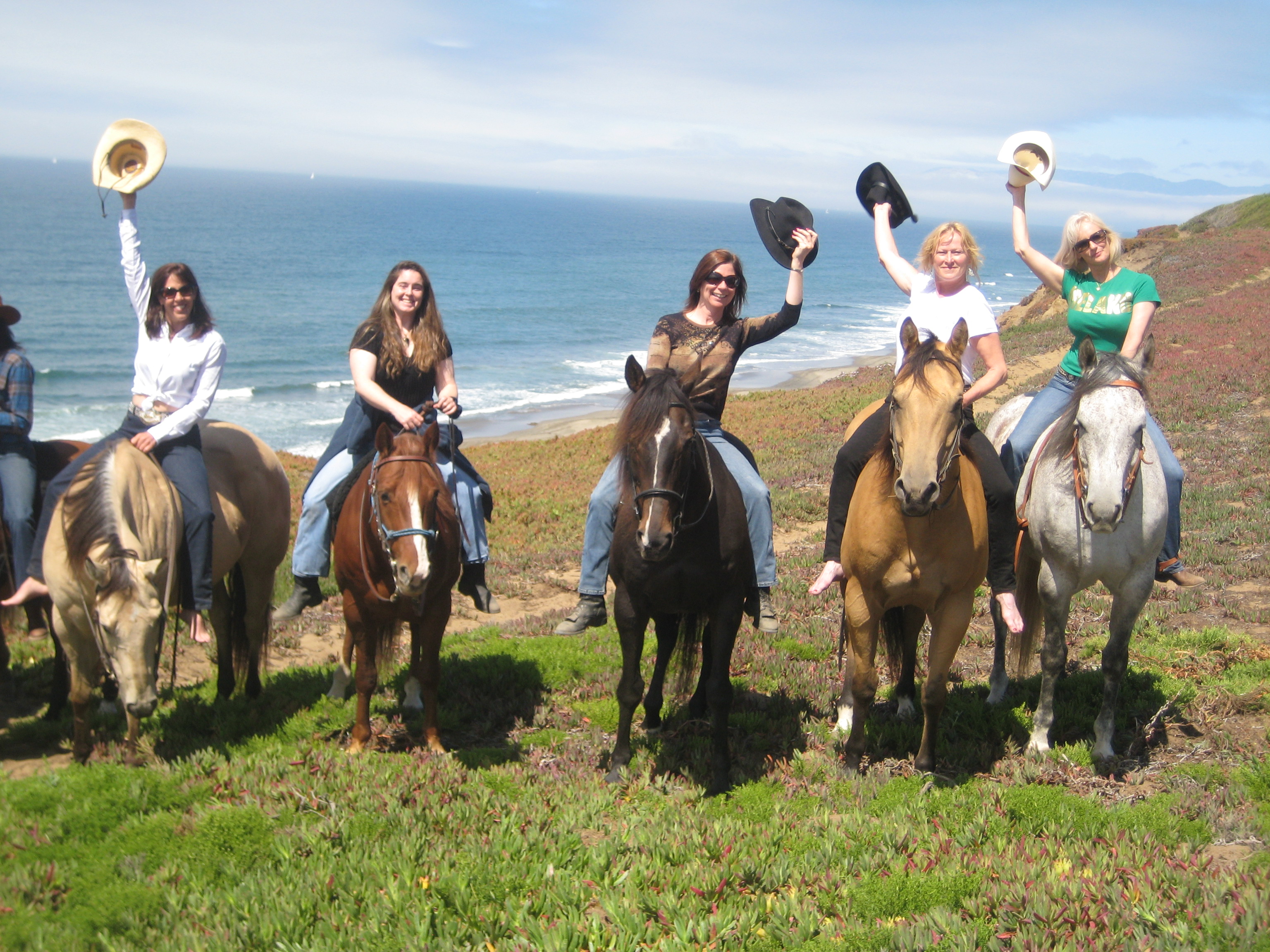